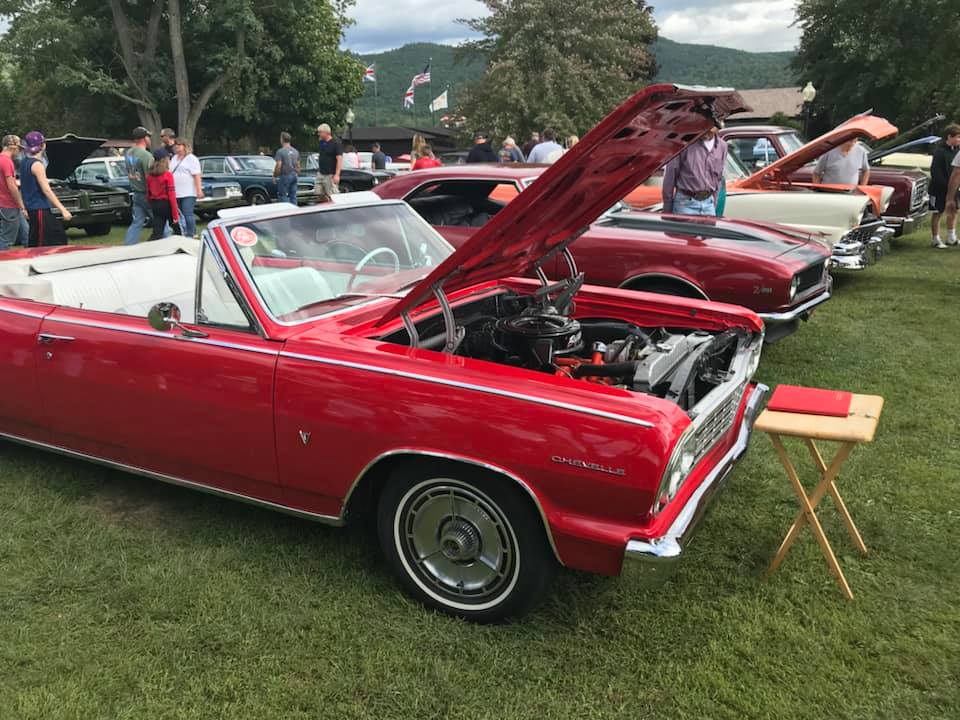 After getting a small but desperately needed amount of sleep at the Fleabag motel that charged me the reasonable rate of $202.00 for one night I rejoined my compadres at their motel. I was just in time for breakfast. When I went to the lobby of the restaurant I found my boys talking to a guy I didn’t know. It was Pete, who had driven up that morning to meet the others, apparently he was a regular part of the group. I liked him immediately although I suspected even then that he would be bunking with us that night and add to the cacophony. But I was too hungry to worry about that then.

After a huge breakfast we walked to the event du jour, the Adirondack Car Show. We weren’t the only ones, the sidewalks were mobbed with people heading the same way.

I was tired, full and probably in need of dialysis but I was as giddy as Michael Jackson watching the Little League World Series. As we went through the gate we were greeted by a wall of vendors selling anything car-related. Beyond that area I could see a ocean of glittering cars. I was in my element, although nostalgic over how I wish my Dad was with me. He loved car shows and he would have loved this one.

The fairground was set up with no particular system. I imagine that the first ones there got the best spots. Classics, Rat Rods, both original and modified muscle, trucks ranging from the 30’s to the 70’s all mingled in perfect harmony. I was immediately struck by how the owners stood by their cars or sat in lawn chairs waiting impatiently for someone to talk about their cars. I am friends with a lot of car guys and I know the labor of love these cars can be in the restoration and preservation process. I was their dream, I talked to everyone. I also got to watch Charlie number 2 reveal his knowledge. The man was a guru of automotive knowledge. I learned a lot by just listening.

After we checked out everything Charlie said let’s go to the top level. I didn’t even know there was a top level. Turns out there were 2. After more walking than I was really capable of we arrived at Carvana. Wow. As it turns out, the top is where the good stuff was. The higher pedigree cars, ones whose lineage could be traced for authenticity and originality and were extremely valuable. Mustangs, GTO’s Malibu’s, Nova’s, Impala’s and a few oddities just called out to me. Eventually Charlie and I reconnected with Charlie 1 and Pete and had a beer in the shade. It was old hat for them, I was blown away. I like cars in case you haven’t noticed. I also like people and there were so many cool ones to talk to. Including this guy…

Once we had talked to almost everyone there (or so it seemed) we went to the shore of Lake George which was at the edge of the fairground and had a late lunch. I was tired. Real tired. But the food was great and the view was better. After, we began the long walk back to motel.

I was done at that point and when talk arose about going back to the pier for appetizers and drinks I politely declined and went back to the room. I had 4 hours to myself but sleep eluded me. I was briefly interrupted when Rick came in and packed his stuff. He got a call from the wife and needed to leave. We said our goodbyes and as he roared off it occurred to me that I may have one bed to myself in his absence. I would later find out that Pete would fill that vacancy. When the guys came back, shitfaced, they all inquired if I got any sleep. They were surprised. 8 hours later when they all arose from another fart/snore fest they were again surprised to find that I had been up all night. Again. I myself was not surprised.

We set out after breakfast for the 200 mile ride home. We lost Pete and Charlie 2 halfway down and at the end it was just Charlie 1 and I. Soon it was just me.

I had time to reflect on the way home. I had done something normal. Nobody talked about dialysis even though they all knew. I had made friends. I had experienced life. I had taken risks and reaped rewards. I had created memories.

All because I said YES.

What may have been an annual event for them was a very big deal for me. While no one has any guarantees for a tomorrow, I have less odds than many. I needed to say yes, not “maybe tomorrow”, or “maybe later”. Life is happening all around me. When an opportunity arises…DO IT NOW.

14 thoughts on “Do it now…conclusion”