You wouldn’t know by looking at her, she is 5 foot 2 and 104 lbs, but my mom is a real tough woman. Nothing gets her down. After burying her second husband in 3 years she went to a “grief group”. Once. She never went back, she said the people there needed to “get over it already”. I thank God every day that I inherited her ability to bounce back and not dwell on the past. She’s not cold, she just insists on always moving forward. This is a wonderful quality. At least it was until she decided she wanted to date again and joined a dating website. 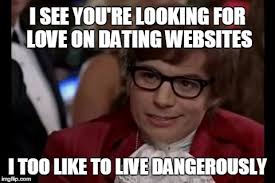 I am torn by this. She says that she has never been alone and part of her needs a relationship. She’s not looking for a husband, just someone to spend time with. I don’t want to stand in her way but I warned her of what she is getting into. But, convinced that our area is too small for her to meet anyone she insisted. I myself have never done online dating but I know many who do and they have told some stories. I quietly sat back and waited for the storm.

My mother is an attractive woman. She doesn’t look her age and she has a very youthful attitude. Her profile exploded the day it was posted. Men from as far away as Oregon contacted her, opening with lines such as “willing to relocate”. Not one response from anyone less than 100 miles away. Against my advice, she responded to most and gave out her cell # and email. She became as glued to her iPhone as my 15-year-old daughter. She wouldn’t tell me but she was chatting for hours with these guys. She didn’t share what was going on with me until one night when she said “this one says he loves me” and shook her head in disbelief. He loves her, by email. He’s 5 states away. 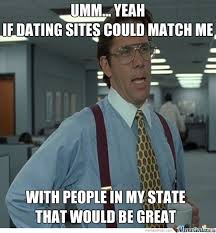 I had to step in. I asked her to let me use my (quantified) ability to judge a person’s character and assist in the “weeding out process”. In doing so I discovered the real problem; she is too nice to shut someone down. If they email her she will respond. I told her she needs to set parameters. Set a distance requirement, not divulge her cell #. So far she has had 2 lunch dates, one of which was nothing like his profile and the other used a profile pic that was at least 20 years old. She has had 2 “very successful” men find themselves stranded at customs without credit cards asking her for money. To her credit, she eventually told them to stop contacting her but she let it go too far. I had to take the phone from her once to tell one guy that he was to stop calling her or he would have to deal with me. I wasn’t very pleasant and I think he soiled himself.

I am very bothered by this process but I am helpless to stop it. It’s what she wants. I love my mother, I want her to be happy and I won’t stand in her way. But I find myself in hyper-protective mode. She is fairly well-off financially and I fear that someone will take advantage of that. My worst fear, of course, is that someone may harm her. I find that the roles are reversing. She raised me and protected me. Now I find myself protecting her. I can handle the role, but I feel awful bad for the poor bastard that does her wrong.

One thought on “too soon…?”