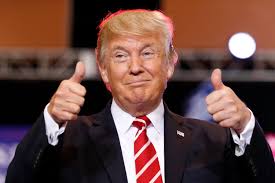 You are perhaps the most amazing story in political history. Your election shook the world. It was historic on so many levels and the shock waves still ripple across the world one full year after your election.

On election night I watched the results unfold with unbridled glee. Not because I was supporting you, (I did in the same manner as every other election I have voted in, I voted against a candidate, not for one), but because of the sheer excitement of it. I felt vindicated because I predicted your victory when no one in my circle did. I simply knew that the polls were not accurate. That many who were polled either gave no answer or lied. for fear that supporting you would cause them backlash or social condemnation. Therefore the numbers that predicted a Hillary victory were simply not accurate and the “silent majority” would speak with their vote, not their voice. As I sat on the edge of my seat I embraced the tumult that then unfolded.

Of course, I didn’t realize the chaos that would ensue. The reaction from the pundits was hilarious and expected. While required to maintain an “objective” expression they failed miserably, they couldn’t contain their anger at your election. No surprises there for me. But the country itself did surprise me and continues to do so. College students felt violated and clamored tearfully for “safe spaces”. Grown men and women cried in public and called for the immediate disbanding of long-standing election protocols. In short, millions of people lost their fucking minds when their candidate didn’t win. It is a sad state of affairs but it is very telling of the mindset of our country. Our youth is unaccustomed to not getting their way, our adults have lost the ability of reasonable discourse, and our country is hopelessly divided. If you do an absolutely amazing job in the next three years your popularity will never exceed 50%. Fortunately, you don’t care about any of that.

Mr. President, you were elected by a lot of people who didn’t agree with the direction the previous administration was going. They didn’t necessarily vote for you, but for the issues that you stood for and that, let’s face it you were a lesser evil to many. You are not an ideal candidate. You are not Presidential in the way you carry yourself. You are crass, you can be a braggart, you are not well-spoken and you are impulsive in your words and actions. I can only speak for myself, but I thought your competitor was corrupt, while I only find you imperfect. I compromised a lot of my personal convictions to vote for you in hopes that you will grow into the job.

As the country still reels from your win, and as your critics and enemies pull out every stop to destroy you please remember that you hold the most powerful position in the free world. If I love my country I cannot possibly in good conscience want you to fail. That would be commensurate to hoping the pilot of my aircraft will fail. Do what you said you would do, fulfill your promises because that is integrity. Please also remember that with integrity comes the ability to absorb criticism, be civil to your detractors and to act upright at all times. The insolent temper tantrums, name-calling, and dick-measuring need to stop. It is not, whether you care about this or not, representative of your office. Even if I didn’t respect you, you sit in the chair that many great men have before you. Act like it.

The country is not broken, but it is cracking. Everything you do can either help fix or further the damage. I’m counting on you. Put the damn twitter account away and charge forward.

Before it’s too late

Often when I take a break from blogging it is because I can’t think of a topic. Sometimes it’s just laziness. Sometimes I just get busy, I’m pretty active for a guy with nothing to do. Then other times I just don’t know where to start. Last week I suffered so many slaps upside the […]

no regrets and no hurry

I had a woman I was dating recently tell me that I talk about my ex too much. It was a deal breaker for her. She was the type (I’ve never met another quite as adamant about it) that didn’t talk about the past at all. She felt it accomplished nothing. Of course, with what […]

I’ve always been a lover of the “footprints” meme above. It was shown to me early in life and the message resonated with me. It’s a nice idea. The whole Jesus thing. Walk beside me, keep me company and hey, while you’re at it can you carry me through the rough terrain? The problem is […]

I mentioned a while back that I would be blogging about some of my favorite TV shows/movies and favorite actors in upcoming posts. I felt it was necessary to justify, if only to myself, what appeal television held when it was always at the bottom of my list of “productive” uses of my time. Maybe […]

We live in a wonderful age. If you don’t like something, ban it. If you object to a historical event, protest it. If you think that something is offensive, demand that it be removed. Never mind if something can be learned from, if it challenges us to embrace our existing paradigms, or if it promotes […]