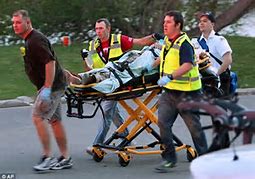 Sunday, September 23, 2018.
I awoke at about 9:30 PM. My chest hurt. I carefully felt the taped area around the plastic port in my chest. It was tender to the touch. I went to the bathroom mirror and pulled down my shirt to look at it. What appeared to be a pimple next to my port caught my eye. I squeezed and popped it. Immediately, I was overcome by the most powerful chills I had ever experienced. I began to shiver to the point of quivering. My teeth were clacking. It was miserable. I went downstairs to my recliner and threw the biggest blanket I could find over myself. The trembling was uncontrollable. Finally, I warmed up enough for the chills to stop. I braved the trip back upstairs and I curled up under the blankets, freezing again. After 10 or 15 minutes I managed to make it stop and remained in that position until morning.

Monday, September 24, 2018.
I spent most of the day under a blanket but I managed to get downstairs and eat something. I felt awful. Mom was concerned but knew that if I needed help I would tell her.

That evening I was worse. I was curled up on the spare bedroom bed in the fetal position under 3 blankets when Mom came in and asked if I felt well enough for her to go out for a few hours.
Take me to the hospital! raced through my brain. Stupidly I instead said,
“Go ahead, I’m fine.”
At some point I made my way upstairs. I was feeling worse. The tremors were nearly uncontrollable. I crawled into bed. I vaguely remember soiling myself but I didn’t get up. The thought of getting out from under the blankets, my only salvation, was unbearable.
Call 911, you’re going to die! my brain screamed at me.
I don’t want to move, I can’t. If I die I die, a voice answered back. It’s over.

Tuesday, September 25, 2018
“Bill, wake up! You’re going to be late for dialysis!” I heard my mothers voice faintly. It took me a moment to realize she was at the base of the stairs. I looked around, I was on the bathroom floor. I forced myself to my feet and then immediately collapsed. At the sound of my crashing to the floor she raced upstairs. Mom assisted me to the bed, all the while asking me if I was ok, if I was able to get up and get ready. I answered her by falling forward and landing again on the floor. The next thing I remember was being hoisted off of the floor of my bedroom by two heavy firefighters. They needed my help to get me onto the stretcher. I had nothing to offer. They picked me up, placed me onto the stretcher. My arms flopped lifelessly from both sides of the stretcher as they struggled to get me down the narrow stairs from my loft.

I was brought to a waiting ambulance. I vaguely remember the chirp of the band radio in the ambulance, being asked a bunch of questions, having my soiled clothes cut off of me, the bumps of the ambulance banging around the bumpy side roads, some commotion as I was treated and begging for a blanket. I was cold. So very, very cold…