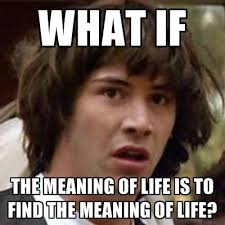 Deciding to be more positive would prove to be less daunting than actually doing it. I was in a rough place. I was still jobless, broke and living with my mother. Not exactly the cover of Forbes Magazine. I decided that the first course of action would be to embrace my surroundings. Despite the hectic, chase- the-dollar-lifestyle I had been living (and dying from) I was always a lover of the outdoors, an avid reader and a fledgling blogger. I spent time outdoors, read voraciously and started this blog…often all while outside. I soon realized that this was where I was meant to be, I just got here earlier than I planned.

I also found myself thinking clearer and better than I can ever remember. I achieved a state of Zen in my thinking, I achieved presence. For the longest time I have felt that I was not living my life, but instead watching it play out in front of me. I had achieved clarity and a desire to be completely, brutally honest with myself. I looked at everything, the good, the bad and the seriously ugly in a harsh and unforgiving light. I sorted out what would never be possible again and cast it aside. I envisioned what I would be capable of and I game-planned it. I forgave myself for my mistakes and I asked God for guidance. I decided, as cliché as it is, that my two choices were to dwell on the avalanche of misfortune that had swept my life away or to move forward. My income would be modest, I would never have the career, lake house and garage full of muscle cars that I had been working for. But money has become less important to me. What matters to me is quality of life.

I decided that I would do whatever it took to get healthy and stay healthy enough to secure my legacy. I would master the one thing that I was able to do consistently, sometimes unknowingly and without effort…to inspire. With apologies to Steve Martin, I found my Special Purpose.

It might seem corny but I have always had an underlying desire to help others. My original Graduate school curriculum choice was counseling. I wanted to either be an underpaid social worker or a School guidance counselor. It wasn’t until I got married and my life became all about paying bills that I grudgingly decided that I needed a “real job”. I decided even then that I would always do what I could to help others, as a job or as a calling. I always felt as if I could do more. Now it appears that maybe I have.

The one thing that got me through decades of illness, bad relationships, and financial hardship was a hard-headed denial. I refused to acknowledge those things that threatened my goals and I was able to downplay and often shut out thoughts that were “downers”. Starting with my chronic illness, I loved when someone said: “you don’t look sick.” Well, that’s good I would think to myself that’s the goal. As I got worse, and more and more people knew about it, the more determined I was to not show it. My doctors would later say that my denial worked for me. By not acting sick I actually stayed healthier.

With regards to my marriage and the money problems, well they were one and the same. My wife would constantly attack me about the finances, asking me if I knew what was going on. If I knew how much trouble we were in? Of course, I knew, but I asked her if she thought it was helpful or healthy to dwell on it. Perhaps I should stay home? Give up? Not try at all to make it better? I suppressed it and went to work, it beats laying down and dying. As with the illness, when people found out how much trouble I was in they would marvel and say “you would never know it by looking at you.” Once again, that’s the point.

My children are grown. My miserable marriage is pending divorce. My health is relatively stable for now. I am debt free. My mind is sharp. Nothing is stopping me now from utilizing my special purpose except time. How much life is left in my years? I’ll know soon enough. But until then I am going to be the best person I can be, and hopefully, instill hope and inspiration in others. Not to achieve accolades, my end goal is so much simpler than that. I only want to be remembered as a good person. I think it’s doable.

I have already started the journey. I have forgiven myself and let go of my grudges and anger. I have forgiven some people that held more of a hold on me than they deserved. I tell people how I feel about them. I take time to say thank you. I find a way to help instead of an excuse not to. I volunteer at the food bank. And I just submitted an application for financial aid in order to study to become a Substance Abuse Counselor. I’m on a roll and nothing is stopping me now. If there is a way that I can make someone’s life just a little better and I have the resources to do it then I’m going to try. Someday, someone will say to my stone “Yea, he was a good guy.” That is all I want. To be the best friend, father, son, cousin, and human being that I can be.

And maybe I will have inspired others to do the same.

I’m not dying, I just live like I am.

This past July I wanted to die. I was so sick, so down and out that my will to live was receding like the tide. Chronic illness had hospitalized me before, kicked me pretty hard but never knocked me to the floor. I always managed to dust off, put on a good face and pretend everything was fine. But this past July was different, it was a perfect storm that came roaring in and left my life in a debris pile when it left. In the 3 ½ weeks I was hospitalized I would lose my job, my apartment and be forced to accept that I needed to go on disability. In addition, I learned that I had lost about 30% of my kidney function. The realization that my Kidney Transplant, the greatest thing to happen to me other than the birth of my children, was failing was more than I was prepared to deal with. I was losing my famous optimism. I could handle a few punches but not the barrage I had been dealt.

I would check out, pack my few remaining belongings into my civic and move to my mother’s house to recover and plan my next move. God bless my mother. She welcomed me into her home, without judgment and gave me all of the tools to recover both physically and emotionally. It would be weeks before I would get my breath back, literally and figuratively, and start to plan my next move. Priority one was getting out of my very uncharacteristic funk. It was bad, even my wife who I feel notices nothing about me, commented “you need to find the old you, the fighter. I don’t recognize this guy. Get him back.”

It would be Facebook, of all things, that would get me on track. Many years ago, when I was really getting sick and in need of a transplant or dialysis, I joined an online support group for Kidney patients. I made a few friends across the country, one of them was Jeanne from West Virginia. Jeanne was at the same stage I was and we often commiserated about our progress. I would get a transplant much earlier than she would and she followed my progress. For someone I never met we knew each other well and had a solid connection. Fast forward to August, Jeanne has since received her transplant and she is doing great. She posted on the 4-year anniversary of her progress and her new lease on life. I was compelled to comment and I posted that I found her “inspirational”. Her response floored me. “You were my inspiration, thank you.”

I was floored by this revelation. To think that my story had compelled someone, had given them hope was invigorating. I told one of my best friends about this, he agreed with her. I would learn that he and many others found my “push forward” attitude refreshing and motivating. That had never occurred to me and I was floored. I only acted as such to motivate myself to keep going. I knew then that I had to find my old mojo, if not for me then for others. I needed to, at this point the only thing that gave me any joy was my children who I never saw but loved more than anything.