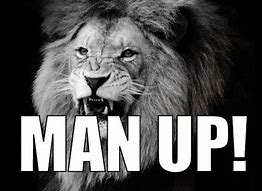 It’s a famous movie scene. Johnny Fontaine is sobbing to the Godfather on the day of his daughter’s wedding. He tearfully exclaims “What am I gonna do?” To which the Godfather loudly and angrily yells, “You can start by being a man!”

I fear for the boys coming up today. They are fighting so many forces. A historic lack of nuclear families is leaving many boys without a male influence (yes, boys need a father). A thick grey line in gender roles, and gender itself, is confusing our boys. Most importantly, society is condemning traditional male behavior as toxic, aggressive and dangerous.

In fairness, some traditional “male” behaviors should be condemned. For example, when flirtation, a natural instinct, crosses over into the realm of misogyny then it needs to be controlled. Flirting is perfectly natural and it is part of the mating process of all mammals. Catcalling is not flirting, it is insulting and degrading to women and in today’s day and age should be a thing of the past. However, there was a time when a woman could handle a flirt gone bad with a snazzy retort or to simply ignore it. Women are not helpless and any strong woman can easily shoot down a man who gets (verbally) out of line.

“Boys will be boys” is not just a saying or a luxury. All boys need to be boys before they can become men. Boys need to chase windmills to feed their imagination. Boys need to slay dragons to grow confidence. Boys need to fight to learn how a victory and a beating feel. Boys need to do the flirtation dance with girls to teach them how to treat a woman. Boys need to play games with winners and without participation trophies because winning is a thing and it is just as important that they know what losing feels like. Boys need to be boys, but they aren’t allowed to anymore. Masculinity is not toxic. It’s in the DNA.

This is a complex subject that needs to be treated carefully and with dignity. It is something that, if not addressed, we will be cursed with a future filled with men whose pheromones could easily be mistaken for perfume. We need to acknowledge that it is not a bad thing to “be a man”, that to be a man is impossible if the boy is stifled, and that women will someday crave a “real man” only to find that the species as we know it has gone extinct.

It is imperative that, in order to handle this topic in a fair and balanced manner the reader must understand that this is, at the end of the day, my opinion. I will attempt to differentiate good masculinity from “toxic” masculinity and give examples of what a “good” and “real man” is.

Lord knows someone needs to get to the bottom of this issue while there is still time.

Stay tuned. I hope you enjoy.