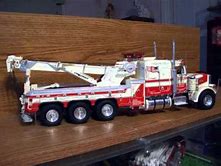 Last night I came home exhausted. Sometimes dialysis leaves me a crampy, washed out mess. Yesterday was one of those days. My sofa was calling my name. But it was not to be. Mom needed help.

We have contractors coming Saturday morning to rip the roof off of our garage and they needed us to get all of the junk in the upstairs of the garage moved to the back. It’s a project I’ve been planning but I was putting it off until the fall because in August the attic of the garage is blistering hot. I wasn’t about to make mom do it alone so I sucked it up and headed up.

It was hot. Africa hot. After a few minutes I was dripping. Ten sweaty, swamp-ass minutes later I was down to two unmarked cardboard boxes. I went over to them, dragged them from the overhang and opened them. They contained Dad’s miniature truck collection.

Dad drove a truck for 35 years. Retail home oil delivery. Over the road Gasoline hauling. He could legally drive anything with wheels. He loved trucks. By extension I did also. By the time I was 12 I could name any truck by name, model and approximate year by the headlights alone (still can). It wasn’t enough that he spent 60-65 hours a week driving, he also had to have his den covered with replicas of 18 wheelers with Wal-Mart, Harley Davidson, etc. markings. Dump trucks, concrete mixers, you name it he had it. Until he passed and my mom put them in storage. I had forgotten about them.

Many years ago Dad gave me some model trucks as presents. I brought them to work with me but they never had a proper place so they sat in the corner of my office in their boxes. When he passed in 2013 I broke down and bought a large bookcase for my office. I dedicated 2 large shelves to mementos of him. The trucks, a collectible baseball that he bought for me, a portrait of him and a license plate from 1929 that I found in my Grandfather’s garage. It was on his first car.

When people came in my office they were naturally drawn to my homemade shrine. It afforded me the opportunity to talk about my dad. Of course, its primary purpose was to inspire me when I was down. He taught me to work hard. To act with integrity. To always do what I say and do it well. To be a man that takes pride in what he does.

They look like just trucks. But they represent so much more to me. Hard work, dedication and pride. He may have been only a truck driver but he was the only one in his family to pull himself out of abject poverty and make something out of himself. And he did it by learning a skill, dedicating his life to it and raising his family through his efforts.

I will spend the day Sunday finding a place to display them again. I miss him more than words can ever express, but there is never a moment when I see a truck, real or model, that I don’t think of him.

25 thoughts on “the reminders are everywhere”