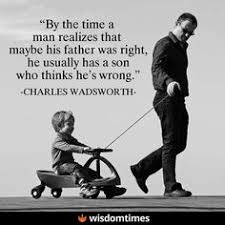 I came home today to be greeted by the sounds of Circular Saws and Hammers. The Contractors are finally finishing work on our Farmer’s Porch that they started in October. On the way into the house I paused to watch in fascination as they measured, cut and nailed with such precision and skill. And, as often happens, I triggered myself. Again.

I can’t hear a saw, a hammer or a drill without thinking about how much I didn’t learn from my father despite the many offers and opportunities. My dad was beyond handy, he could do almost anything with his hands. My earliest memories were of my dad rebuilding our house as we lived in it. He would work from 5 AM to 6 PM or later, slam down a quick dinner and then go to work until at least 10. The saw and hammer were sounds I knew at a very early age.

As I got older Dad tried to enlist my assistance, not because he necessarily needed help but instead to teach me. I was eager to help him but not very interested in learning anything new. This was odd for me because I was an eager student in every other aspect of life. I would pull nails from a pile he created, I could swing a hammer fairly well but offers of learning to measure, use woodworking tools and such were dropped due to lack of interest. Even offers of car maintenance were met with tepid enthusiasm despite our shared love of everything to do with cars.

One incident really stands out in my mind. One evening when I was in my late teens Dad offered to show me how to change the oil on my car. He had it already in the garage, the drive up lifts set up and all. The house phone rang (cell phones weren’t invented yet) and it was my girlfriend (she was goddamn gorgeous if that is relevant at all here) and she was imploring me to come over her house. I told her I was doing something with my Dad that was important and she insisted that it was very important. I had to make a decision and I can honestly say that I made the wrong one. I blew off my Dad.

The look of disappointment on his face was tangible. In my feeble defense, I really thought my girlfriend needed me. That almost helped me pull out of the garage feeling good about myself. Almost.

I arrived at my girlfriend’s house 20 minutes later and knocked on her door. She yelled for me to come up. I went upstairs, asking as I climbed the steps if she was ok, still very curious as to what the emergency was. As I entered her room and saw her lying there buck naked with a rose between her teeth I knew that I had been suckered. It was merely a sexual emergency. I somehow managed to get through it but soon after I began to feel bad.

I apologized profusely to my Dad the next day. He was curt and brief with me. He wasn’t mad, he was disappointed and that was always so much worse. He told me that he had offered to show me something for the last time. It was a pivotal moment in my relationship with my father and one of many regrets that I have from my childhood with regards to my dad. If I could talk to him for only five minutes it would be a priority in the conversation. He was such a hard-working and self-taught man. I admired him so. I take some comfort in many other things that I did learn from him that have made me the person I am but there is still a lot of regret.

Sorry Dad, how’s it go…If I knew now what I didn’t know then?

the dynamics of hope

“Have you ever thought of harming yourself?” My favorite question of the Hospital admitting process by far. In the many times that I have been asked this, especially lately, I have answered with a knee-jerk and resounding “no”. Thursday, before I could stop myself I said yes.My first reaction was to try to backpedal, but […]

I am easily in the worst funk I have ever been in. The cold and short windows of sunshine always affect me but this year is by far the worst with regards to being down. I think I’m clinically depressed. I’ve let my appearance go. I hate showering because the bathroom is so damn cold. […]

One of my earliest memories was watching the Resignation of Richard Nixon on TV. My parents sat on the edge of their chairs and assured the eight year old me that this was a momentous occasion that I would remember for years. They were right. I couldn’t believe what I was watching. Soon after I […]

People watching is my thing. Many notice how absorbed I can be when out in public. They comment that I’m not paying attention to them, that I’m distracted. Rude even. I’m not really, I’m just studying the people around me. They often wonder what I’m looking at and I know they would be surprised if […]

I sat down last night to write a blog. I was motivated by the usual, traditional, dreadfully cliche and tired habit we have of waxing poetic about the coming year. I didn’t really have a plan. I had a few things I wanted to vent about but it wasn’t very linear. But I decided to […]