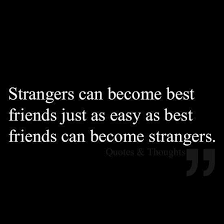 you were the quiet guy in the corner cubicle. The guy who nodded shyly as I was introduced around the office the day I started.

you were the guy with the tedious job that you were good at, or so you were told because no one else wanted to do it.

You wore the same outfit on the same day each week.

We jokingly called you “Rain Man”, not for your astounding intellect but for how flustered you got when you had too much on your plate. I felt bad for calling you that sometimes.

you would end up being someone I dealt with extensively every day.

You were the guy that took a while to make small talk.

you were the guy that I made a real effort to understand in order to better work with you. It was worth the effort.

you were the guy that when I spent time with him you loosened up a little.

you were the guy that started poking his head in my office to just talk politics. You were a news junkie like me.

you were the guy who gave me a box of newspapers from the 60’s because you knew I loved history.

you were the guy who I definitely noticed when you were not at work, which was rare.

you were the guy who lived with his mother and I suspect was a virgin.

You were the guy that asked me to keep him in mind when the company closed and we parted ways after 8 years.

you were the guy that got a new job finally after almost a year on unemployment.

you were the guy that didn’t show up for his first day.

you were the guy that was found dead in his house that night.

a guy that I am glad that I knew.

a guy that I am going to miss.

you were the quiet guy in the corner cubicle. Your name was John

5 thoughts on “The guy in the corner cubicle”